Split is the second largest city in Croatia and an important cultural, tourist, industrial, commercial, administrative centre of Dalmatia. Its port is the biggest passenger port in Croatia and one of the major passenger ports in the European Union. ArcelorMittal Europe  ̶  Long Products provided 2,500 tonnes of rebar and bendings, produced in Zenica, for the extension and the reconstruction of the passenger terminal.

Based on its historical heritage and its 1,700 years of tradition, the city and port of Split have become an unavoidable destination of vessels cruising in the Mediterranean. In 2014 nearly 4.5 million passengers travelled through the city's port but also more than 600,000 vehicles and 3 million tonnes of cargos.

600 m of quays reinforced with our steel

ArcelorMittal Zenica produced 2,500 tonnes of rebars and bendings which were supplied by the companies Viadukt in Zagreb and Hermes in Croatia. We have been working with them for over than a decade, and as they already appreciate the quality of our products and our short term delivery which simplified their choice of steel supplier. The project, which started in October 2014, includes the construction of 600 m of quays and 2 embarkation / disembarkation ramps of 28 m wide mounted on 321 pillars, which will be reinforced with our steel.

This project is the biggest investment in the history of the Port of Split; it is estimated at € 23 million. It will help to alleviate transport congestion in the port which will be able to take in large cruise ships with more than 4,000 passengers. 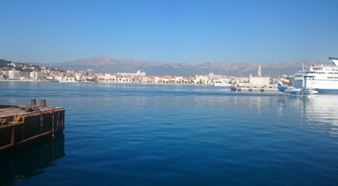